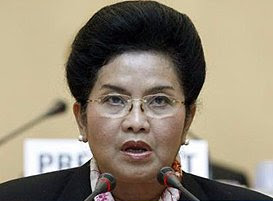 Indonesian Health Minister Siti Fadilah Supari is not just a jackass but a fraud and a dangerous Islamic freak the world needs to see the back of, along with the Republic of Indonesia itself.

While Indonesian language TV programs broadcast outside (on youtube) but of course not inside the RI the fact Siti Fadilah Supari is not a true doctor as her phoney doctorate "Drs" title alludes, because she never went to university and her "degree" is conferred (bought), Islamic nutter Siti was spurting off her latest "research" revelations regarding swine flu.

First came her revelation that Indonesia was safe from swine flu because a) The RI is tropical and swine flu was from colder regions and would hopefully not survive in the tropics; the fact it emanated from very hot Mexico was somehow lost on this genius, and b) because Indonesians have different physiology's to non-Indonesians; you will not find me disagreeing on that score you dumb mutt but even if it were true, swine flu can and does jump species.

Then, former cardiologist and with that fact reason enough for never seeking medical help in Indonesia, the mad Muslim madam went on to blurt swine flu was man made, which by her definition means it did not come from Indonesia. Of course Siti is well known for her anti-infidel rhetoric about the origins of viruses, having previously claimed H5N1 Bird Flu was made as a weapon by the USA!

All this is fine for me except that it risks the lives of many Indonesians and also human beings; OK, OK, many Indonesians are human beings, just not Siti and her cohorts. You may remember Siti not so long ago tried to claim intellectual rights to H5N1, so she could make a profit from it; she even went so far as to stop vital infection samples being sent to the WHO in case some western pharmaceutical company made money from them! Then, because Indonesia's handling of the bird flu problem was so kak handed, the publicity of which being bad for pride and business, she blocked the reporting of new infections so the Indonesian tourism industry would not suffer. Like all bad news that affects pride and business in the RI, it is covered up. Thing is, what is worse? The Indonesian Health Minister for doing this, the foreign governments who do not warn their citizens of this subterfuge, or the dumb Aussie and other tourists who go to Bali because of a false sense of safety?

Kept quiet by the WHO this time and lost on most too is the risk of highly human-to-human contagious H1N1 swine flu becoming an unreported pandemic in Indonesia, like SARS was where Indonesia claimed never to had an infection while thousands of sick Indonesians went to hospital and never returned. The WHO is petrified, as they should be, if someone catches both viruses, that H1N1 swine flu could mutate with deadly H5N1 bird flu and then give the world something to remember Indonesia by; billions of people dead worldwide suffering horribly in the process.

This is why we need our governments to get rid of the illegal state of Indonesia, to ensure its people are given their legal right to self-determination, to get rid of the mutts and monkeys kept in power by a sordid blend of corruption and human rights abuse. With Islamic psychopaths like Siti Fadilah Supari running Indonesia's health system, surely people can see there is no future past death and destruction from Jakarta. Don't just boycott Indonesia including Bali to help bring on the end of this sick pariah regime, tell your politicians it is time to act against this human garbage. Indonesia militarily is weak and inept, how about some regime change down under? Annexing everything outside Java and Sumatra like Jakarta did in reverse in the 50's and 60's. Giving the people of West Papua, Sulawesi, the Moluccas and Bali some hope for the future, and the rest of us some peace of mind and good conscience. Come on, do your bit to get rid of Islamic wacko Indonesia and the problems it increasingly poses to the world.
Posted by Bali Bollocks - don't sell out! at 22:17

Quick, send in the Australian army to liberate West Papua!! While they still have their gold reserves.