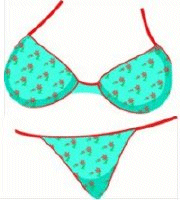 Tourists will possibly, maybe get to witness only one aspect of the so-called and duly legislated Indonesian Anti-Pornography Law's impact on Bali, as this repugnant de facto Sharia legislation has been altered so as not to affect the valuable tourism dollars of course. What westerners will see are plenty of nubile to horribly fat western women in bikinis leaving nothing, often unfortunately, to the imagination, but what you will never see from now on is a Balinese woman in one. Why, in a bizarre and insulting prime example of how Indonesia violates human rights, Balinese women can and most likely would be arrested if they wore one; it is illegal for Indonesian women to wear bikinis in public but not foreign tourists! In the same manner, it is perfectly legal for tourists to wear flimsy airy clothes, tight fashions and kiss each other in public, but it is now illegal for the Balinese to do likewise on their own island.

OK, to be truthful, not many Balinese girls are so immodest as to wear such attire anyway, but they used to in small numbers and why not? Why? Because the nasty Islamic state of Jakarta wants to afflict its people yet again and in increasing form. It is not however the sad loss of seeing the occasional piece of Balinese totty in a g-string, it is the hidden side of this nasty Muslim law that should concern us all.

OK, in most respects, the law has not been enforced on Bali, but it does get abused like all ambiguously worded, selectively applied Indonesian laws. You see any Indonesian has the right to "sweep" for offenders, which means the Muslim minority now hold the ability to abuse the majority Hindus. Indonesia has a large enough problem already of young girls and boys being sexually abused and even forced into the sex industry, which is run and / or protected by the police, the most corrupt government officers in one of the world's most corrupt countries says Transparency International, so there is no legal protection. So now you can sweep for a vulnerable Balinese girl doing nothing more than bathing or wearing the dress of her ancestors and blackmail her into throwing her life away.

But what the hell do we care? We can go to Bali for a few bucks, buy fake bling, shout profanities at the subservient smiling Balinese, act like Javanese, and hey, maybe even get a piece of the action ourselves; find ourselves a poor Balinese girl and blackmail her into having sex with us!

But the rot which has started will not end. The fact only nationalist and nationalist Islamic parties are allowed in Indonesia. The fact all politicians are sworn in with a copy of the Koran over their nasty heads. The fact the western governments and media's darling, President Susilo Bambang Yudhoyono has now formally aligned himself to the Prosperous Justice Party, an Islamic organization with radical Egyptian links responsible for the Anti-Pornography Law and the banning of the Ahmadiyah religious sect (a peaceful law-abiding more liberal version of Islam). Yudhoyono and the Prosperous Justice Party are nothing about prosperity and justice, they are about Sharia Law.

Go ahead, have your cheap thrills in Bali, but don't bleat when the bubble bursts or even goes bang. Don't you dare say "Why didn't anyone do anything about it?". Your governments may be whores for the corporate buck and shortsighted short term regional political gain, but you do not have to be. It is easy enough, find somewhere else to go on holiday. Somewhere where you are clearly not just a money tree. Somewhere where murder, rape and oppression are committed with your holiday bucks.
Posted by Bali Bollocks - don't sell out! at 00:57