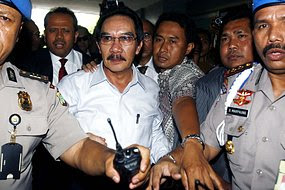 So Antasari Azha, chief of Indonesia's bogus KPK / Corruption Eradication Commission (bollocks), has been arrested for murder. It made the news, whoopee; people act shocked! But it is no surprise to me as Indonesia is a country run by murderers and fraudsters. The KPK is and never was anything but a political witch hunt organ for the truly powerful; able to investigate corruption against someone who is not flavour of the month on the basis everyone in the RI is as bent as hell. The only people the KPK are unable to touch being the Indonesian police and military of course, as these are beyond reproach despite being the most prolific and aggressive corrupters and human rights abusers in the archipelago.

So it seems Antasari Azha paid to have a businessman murdered because, wait for this, he was also shagging the same 22 year golf caddy girl. What pride Jakarta can take out of all of this. I wonder whether the powerful person who fingered Azha, because that is what it takes in a land where justice does not exist for everyday people, whether they somehow now regret the fallout from this oh so typical dirty laundry of a nation run by thieving monkeys.

So why put such a dodgy character seemingly with such an easily provoked desire to kill in charge of the KPK? Well, when you look at what is available from the ranks and vile of Jakarta's elite [sic], you really do not have much choice, do you! Do not believe for one moment Antasari Azha is someone different or worse in Indonesia; he epitomizes middle to upper class Indonesia. So many of its leaders wanted for war crimes, so many mired in fraud and corruption; hell, its the reason they want to be elected to head the government, police, military or important department, to make a lot of money and be what they were born, bastards.

The problem for poor Antasari Azha is not that he is any different to the rest of Jakarta, it is because he picked on one too many people while heading the KPK; he was a victim of a witch hunt himself. As one party decided to knobble another party's man by spilling the beans to the KPK, Antasari Azha is guilty of lack of balance and restraint, of playing one political group off against another, of never favouring any particular sect too much. He made the mistake of being a witch hunter too much and too often for one group, so another group decided to witch hunt him abusing the police to get their man.

Pundits will spout off this is a victory for anti-corruption in Indonesia, that Antasari Azha's arrest is a sign the system is working. The thing is, the system is working, but it aint the anti-corruption or judicial system, it is the age old Indonesian system yet again that is the player here. For the anti-corruption and / or judicial system to start to work you would need to see police officers and TNI (Indonesian military) officers being tried. Until that time, Antasari Azha is getting his, but not in the manner it should be dealt. Until that time anti-corruption and justice in Indonesia is just a load of bollocks.
Posted by Bali Bollocks - don't sell out! at 19:00