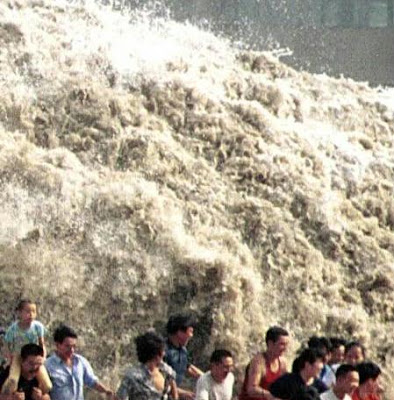 Go on, take a good look; this is the tsunami that nearly hit Nusa Dua Bali at 3:00 AM local time on Friday 12th February 2010. The event out of the mainstream news around the world as foreign media and governments pander to Indonesia's government and their selfish big bucks tourism industry.


It is not of Bali, luckily, this time, of course. For one the near miss in Bali happened in the very early hours, so these terrified tourists would not be have been fortunate to have daylight on their side. No the picture is of tourists about to be battered and lose their lives in Thailand, in December 2004. Secondly the preceding earthquake when, not if, it hits Bali, would destroy virtually every building in the tourist south, so there would not be people able to run from the resulting tsunami even if they wanted to.

12 February 2010, 2:43 local time, a large 6.6 on the Richter scale earthquake struck 210 Km off the coast of Nusa Dua, 10 Km below the surface of the water. Had the quake been equal to the one off Aceh in December 2004 which first destroyed North Sumatra and then sent a 24 meter wall of water crashing into Aceh and then beyond, Bali would have been decimated; the loss of life making Boxing Day 2004 look like a dress rehearsal. As the oceanic shock waves sped towards the tourist south of Bali, with an average speed of 750 Km per hour, the resultant tsunami would have hit Bali in under 17 minutes later.

Phew?
Was the Nusa Dua Bali quake a one off? Or the main quake with ever decreasing aftershocks yet to come? Or was it an event which shifted the tension between the Eurasia and Australia tectonic plates; the very same fault line that produced the Aceh 2004 tsunami?

The Famous Tsunami Warning System!
While the very nasty Indonesian Government and tourism industry lords the Tsunami Warning System as the safety net that keeps Bali's tourist wallets safe, while the foreign governments and media play down the risks (recently heightened amidst reports by several scientific bodies) in order to suck up to murderous Jakarta and its paradise island of pedophiles and western criminals on the run, the tourists soundly sleeping in their beds at 3 AM in the morning got a nasty shock, but fortunately for them only a near fatal one.

Understand that no western foreign department is going to issue anything but general earthquake zone warnings for Bali on their travel information pages. Understand cheap trick Balinese travel agents will try and sell you mobile text messaging to warn you of an incoming tidal wave. Understand the Indonesian Government only cares about your foreign currency and that telling the truth, which they are adept at doing the reverse of, would cost them money. So you will be told that beach sirens will warn you and that hotels have trained in mass evacuations.

BS
When, not if, the Bali tsunami comes, there will be no need for beach sirens or text messages to your mobile. The reality is, anyone in Bali will more than feel the massive earthquake 17 minutes before they get pounded and drowned. With the building codes so lax, to say the very least, in Bali, the hotel you are sleeping in would almost certainly come crashing down on top of you. If you were "lucky" enough to escape without serious injury you would only be able to run a few meters with all the wreckage around you; forget neatly dressed smiling staff guiding you to safety, they will be running like hell.

There is increased tectonic activity and risk for Bali right now. If you must travel to the island of thieves, stay away from the Southern coastal areas (Nusa Dua, Sanur, Seminyak, Jimbaran, Kuta, Canggu, Legian, Candi Dasa, etc.); stay in Ubud or on the Northern Coast where the damage from earthquakes and tsunamis is less.

Do not be a stupid mutt. Do not become a victim of greed over good travel advice. And if you are as p'd off as you should be the truth / reality of earthquake / tsunami risks in Bali are not just played down but hidden so as not to deter your wallet's arrival, do what a honest, decent person should do and boycott Bali, Indonesia all together.

Update
It was a 5.7 quake facing Kuta to Canggu
Quake epicentre location map
Posted by Bali Bollocks - don't sell out! at 00:14 1 comment: